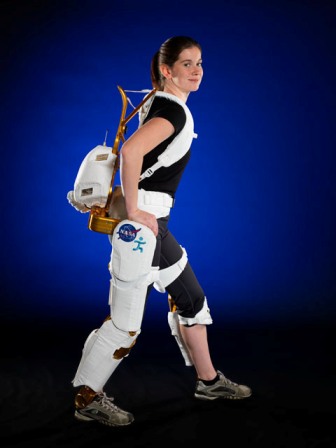 11.11.2012 - Known as the X1 Robotic Exoskeleton, it is a light weight apparatus that is worn over the length of the legs and has a harness that goes up and around the wearer’s back and shoulders. It is a robotic frame that has four motorised joints, two each at the hips and knees, which have various settings for speed and resistance. There are also six passive joints that allow the wearer to turn, step sideways, and point and flex their feet. The apparatus also has multiple adjustment points meaning that it can be used in various ways. It’s main purpose at the moment is to provide resistance in leg joints when an astronaut is moving, working muscles and parts of the body that are not usually needed in microgravity. Although it is currently in the research and development phase, Nasa is hoping to that it will help keep astronauts in trim whilst aboard a space station and during future long stretch missions to Mars, for example. The device is fitted with sensors that measure the effectiveness of the exercise regime, meaning that doctors on Earth can record the astronauts’ progress and make adjustments to the suit as appropriate. The project is being developed in conjunction with the Florida Institute for Human and Machine Cognition (IHMC) which has provided the walking algorithms for the device. A future aim of the project is to improve the design so that, during surface exploration, the X1 will provide additional force when necessary, to enable astronauts to walk in reduced gravity environments in a similar way to how people walk on the Earth’s surface.
Twittern