Solari seals Tenerife's fate
It was a game of four halves – and if merit and sheer grit and determination decided the outcome of such matches CD Tenerife would be in the last eight of the Copa del Rey, but unfortunately only goals count.
Twittern 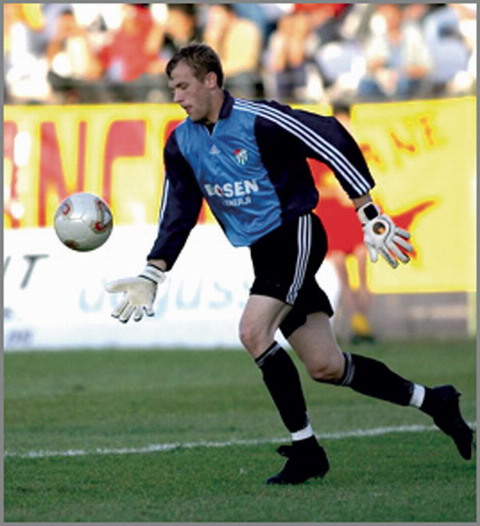 The best player on the pitch last night, CD Tenerife goalkeeper, Keleman
Santa Cruz - 11.11.2004 - There were no galacticos in sight in the Heliodoro last night.  The team sent by Real Madrid, described in local press and Madrid Light or Decaf Madrid seemed the poorer side for much of the game, but CD Tenerife took a while to overcome their nerves and also blew a few chance.  But once they settled in they played well, but only in patches, and as time wore on became extremely sloppy midfield with some dreadful passing spells.


However they drew first blood, just after Marian Keleman (easily the best footballer on the pitch) saved a Morientes penalty, with a free kick taken by Fagiani flicked on by Cristo just three minutes from half time much to the delight of the almost packed stadium.  But sadly tow minutes later Solari equalled the scores with a thunderingly brilliant free kick that no one could have stopped.


The second half was marked by a lack of match rhythm by either side for the first 20 minutes, but the blanquiazules began to take more and more control, and certainly their rivals looked anything but ‘galactico’.  The feared Michael Owen was a damp squib as a threat, and the only danger man, Morientes, was injured early on and was substituted by Soldado.  CD Tenerife pushed with all their might and a few of their efforts were oh so agonisingly close, but just wide of the mark. Extra time was called.


All 22 players on the pitch were showing signs of weariness, but for most the extra time it felt as if the island side would triumph.  They got closer and closer, but the elusive goal remained just that, elusive.  And suddenly, with just under two minutes to go, the horrible inevitable happened – a free kick just out side the box, and the same man, Solari, steps up, and another superbly executed kick saw potential victory cruelly snatched from blanquiazul hands.


Elsewhere a few more notable scalps fell by the wayside, with Deportivo continuing their dismal season losing to second division Elche by one goal.  Four teams from second division B won to take their place in the last 16, Gramanet, Lorca, Miradés and Lanzarote, who beat Mallorca 2:1both goals by Maciot Dévora.